It's Absolutely Fine For Not Trusting 'Eco Friendly' Brands. In order to help the environment, please consider purchasing a shirt to add to your already massive collection. (Sarcasm Here)

I feel deeply about the need to protect our planet. But, much like the general public, I find environmentalists boring. They usually have a tone that is antagonistic to people. Some people probably think, deep down, that we're all murderers for destroying the planet with our industrialised lifestyles.

It's possible they're correct. But it's settled science that the planet is doomed, and the fossil fuel era is largely to blame. The level of pollution we've been putting out into the world has been increasing, and even apathetic people know we have to stop if we care about the planet's future.

It's high time we started asking questions with an eye toward finding answers. Just how much of our "green" actions actually benefit the planet, and how much are just for show?

So it's funny to me when folks pat themselves on the back for being environmentally conscious by opting to buy green goods. The concepts "buying" and "environmentally friendly" are mutually exclusive. It doesn't make a difference if you invest in a low-power laptop, a stylish cruiser bike, or a t-shirt made from organic cotton. Even yet, you made a purchase, necessitating the need of electricity to run numerous devices.

When a consumer refrains from purchasing a new product, they are acting in an environmentally friendly manner.

Thus, I am reminded of who is truly doing their part to save the earth when I see a girl riding a brand-new $600 cruiser bike down Broadway and a dirty hobo sifting through the trash for pop cans behind her. The one who didn't go out and get the latest and greatest mass-produced thing.

This very well covers up why genuine eco-activism, like carbon-neutral living, is shunned in favour of phoney, feel-good eco-activism. If you want to be a true environmentalist, you'll have to rough it. That calls for minimal shopping, a penchant for secondhand goods, and a willingness to make do with what you currently have.

In June of 2016, I found myself without a home and surviving in a jungle about an hour's walk from Manali. After spending weeks in the woods and beside the river, it was inevitable that I would come to believe that nature is more holy than I had ever recognised in the concrete jungle.

As a result of your rural upbringing, your perceptions have become sharply dichotomous. There are the world's timeless creations, such as mountains, woods, and fauna, which have not changed in a million years and which you may view first. Second, you can observe examples of man-made creations such as juice boxes, soap, and insect repellent.

In the modern world, people rarely think about the disruption these man-made objects cause to the natural world. You might say, "Well, that's an ugly but no big concern" if you happen to notice an empty chip bag on the street.

A chip bag may seem innocuous enough in the city, but when you're out in the woods, wandering through unspoiled wilderness, it becomes a potent, even frightening symbol of what humanity does to nature. You see that our waste outside the city and pollution high in the atmosphere still harms the planet.

In our modern, urban lives, we tend to forget about this fact. It's not easy to imagine all the steps in the manufacturing process that went into the item we just bought. It's also tricky to put a number on how much damage human consumption does to the environment.

Don't waste your money on disposable items; invest in durable goods instead. Spend your money on a bike that will last you at least two decades. And if you can do it, try to avoid upgrading your computer or other digital device every 18 months.

Perhaps reducing one's consumption is not true environmentalism, but it is a reasonable step in that direction. I get that some people despise the outdoors and consider it to be dull, cold, and unpleasant.

The Earth may cry acid rain, but I'm not here to tell you that you're responsible because you don't live off the soil as certain environmentalists do. The fact that polluting the environment is as natural to humans as taking a breath is something I can appreciate. That's right, we all contribute to global warming every time we breathe out. 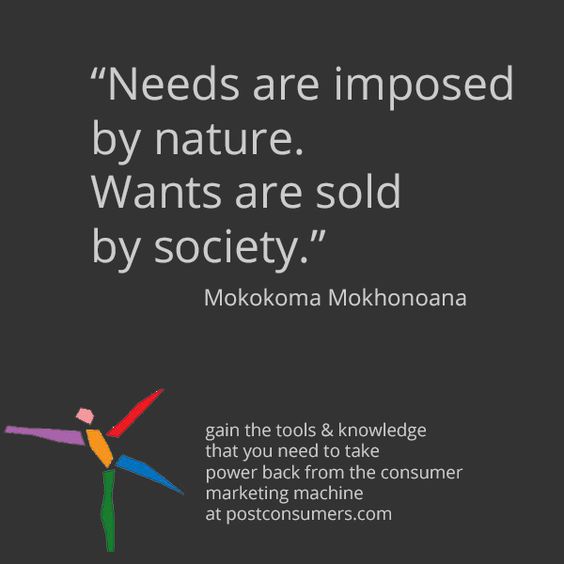 However, we may reduce our impact on the environment by making more conscientious purchases, without having to live like our hairy, cave-dwelling predecessors did.

If you can relate with my thoughts here, please share this :)