Join us
0
Home GZ Diary #SaveBuxwaha: All About Buxwaha Protest in MP ! Must Know

#SaveBuxwaha: All About Buxwaha Protest in MP ! Must Know

In Buxwaha forest, in the Chattarpur region of Madhya Pradesh, a steady agitation has been brewing against the bid won by the Aditya Birla Group to extricate diamonds of an assessed limit of 3.42 crore carat, ensuring the felling of over two lakh trees in the process. The project undertaken by the Essel Mining & Industries Limited of the Birla Group in December 2019 is spread over a 382.131-hectare land of the protected Buxwaha woods that is proposed to be allocated to the Bunder diamond block. The forest clearance report expresses that a sum of 2,15,875 trees would need to be chopped down around here for the proposed mine.

The region is situated near Chattarpur Falls – a drought-prone area of the Bundelkhand region. Tampering with nature and timberlands through deforestation could prompt huge environmental debasement. The Buxwaha mining project adds to the enormous natural destruction which is already anticipated with the Ken-Betwa stream interlinking venture in the area. Such massive deforestation in a drought-prone area can lead to fatal salination of the soil and land degradation.

Another significant concern is that the cutting of over 2 lakh trees would destroy the woodland encompassing rare plants and with that, the sheltered wildlife species. The Deccan Herald states that these include: Khair, Bel, Dhava, Seja, Ghoat, Renjha, Amltas, and Saugon. Many of these trees are rare species, which are unique to the region. The area also has an assortment of fauna, which includes seven species recorded in Schedule I of WildLife (Protection) Act, 1972; these are the Indian Gazelle, Chowsingha, Sloth Bear, Leopard, Monitor Lizard, Indian Rumped Vulture, and Indian Peacock. 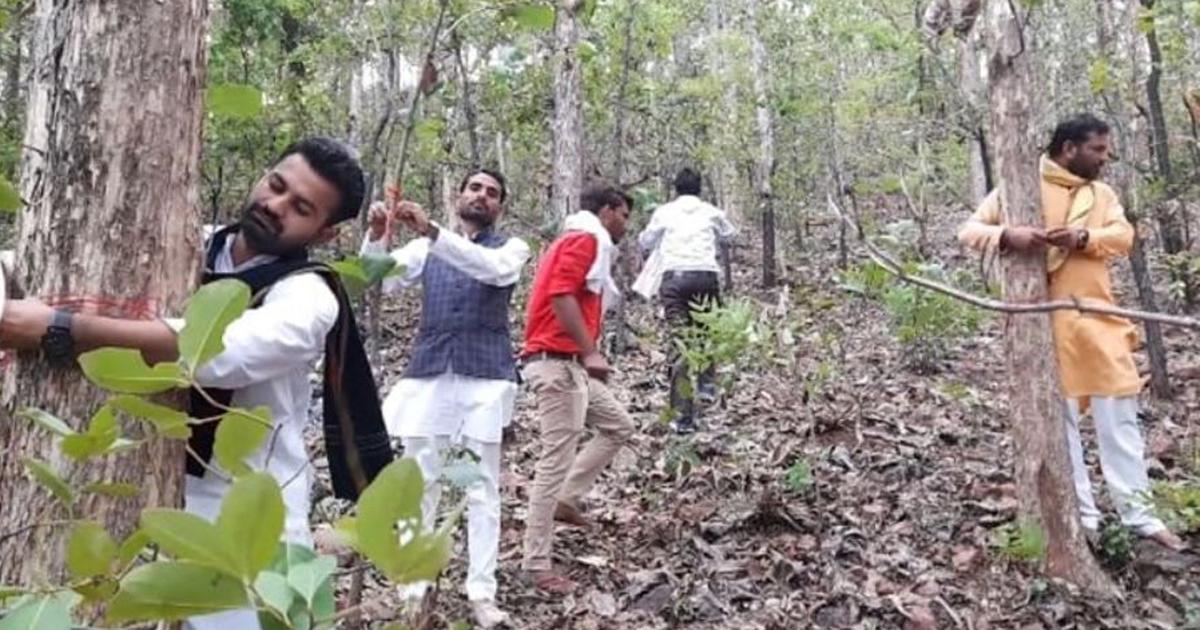 Threat to the Tribal Livelihoods

The woodlands are gravely affected because of human activities and encroachments, the individuals living in the towns situated in the area under focus are dependent upon the backwoods for at least two to four months in a year for their business. According to the reports published by The Quint, the area is still considered backward. Around 7,000 locals of the 17 tribal villages in the domain rely entirely upon wood-sourced items, such as Mahua, Tendu leaves, Chironji, Amla, and so forth, for their source of income. The Tribals also sell different timberland items and bring in cash to support their lives. They dread that the mining will destroy their business and their livelihood will be wiped out after the felling of trees in the woods.

The locals and Tribals living close to the region are battling for their environmental and livelihood rights, furthermore, this colossal-level chopping of the backwoods will bring down the groundwater level, wash away the topsoil, and will obliterate a productive connection among the environment and its people.

The project is facing stiff opposition from locals and environmental groups for quite a long time, due to the massive ecological harm involved in the venture. Protesters organized an emblematic “Chipko Movement” in Buxwaha at the event of World Environment Day on June 5, 2021. However, the greater part of the fight is taking place on social media; environmentalists have taken to Twitter to shed light on the issue by trending the hashtag #SaveBuxwahaForest; plus, a petition filed on Change.org by Aniket Mishra has gained over 77,000 signatories. A Public Interest Litigation (PIL) has been filed by ecological activist Neha Singh, while Dr. P.G. Najpande has made appeals to the National Green Tribunal (NGT) petitioning to withdraw the authorization granted for the diamond mine.
Advocate Sudip Singh Saini has presented that the state government has rented out 382 hectares of woodland to the Essel group for the following 50 years to set up a diamond mining project, which requires the forest land that is home to around 2.15 lakh trees to be cleaned up. As per the supplication, it brings about unrecoverable obliteration to the general ecosystem and valuable natural life reliant upon it. Furthermore, it impacts the business of around 8,000 Tribals presently living around this land.
On Friday, June 17, Chief Justice Mohammed Rafeeq and Justice Vijay Kumar Shukla's division seat gave a notification to the Central government, state government, and Aditya Birla's Essel Mining gathering to react to the request submitted in the court by Advocate Saini.
The time to take action is now; it is high time that conglomerates and authorities learned that the people of India value their beloved forests more than petty diamonds. Join hands to save this massive forest clearance. It’s now or never.